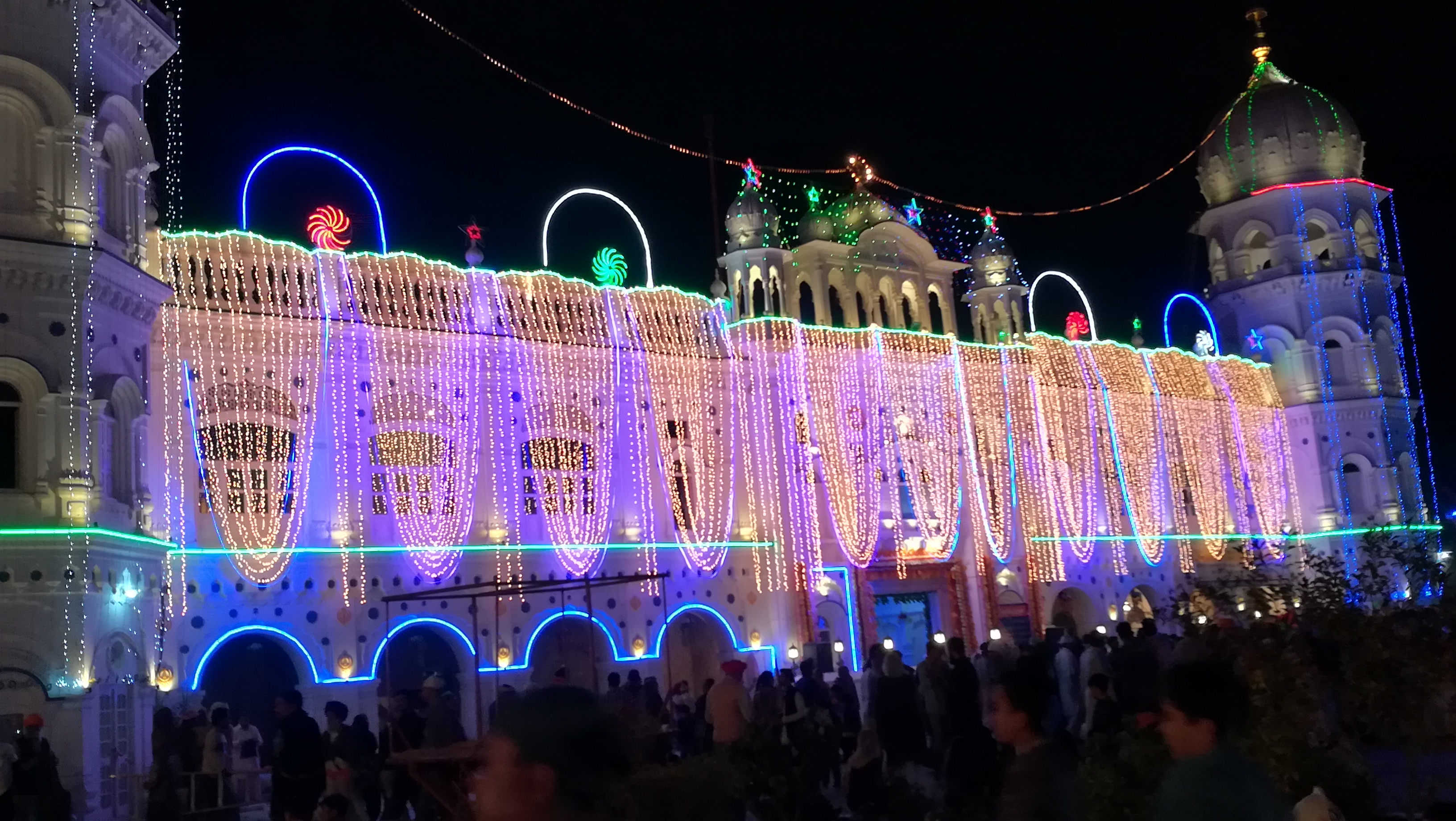 Singh Sabha Gurdwara was started in the late 1960´s.

Ceremonies were held at local schools before the purchase of the property as 130 Northumberland Road. The next door property was purchased later and the Gurdwara expanded. Punjabi classes were started at the Gurdwara and helped various persons to learn their mother tongue and also learnt to recite Gurbani and Path. 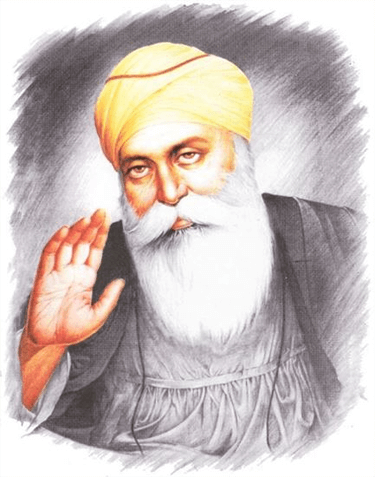 The founder of Sikhism. Guru Nanak was born in 1469 at Talwandi in the Punjab. Talwandi was later renamed Nankana Sahib in his honour and is now in Pakistan. Guru Nanak’s father, Mehta Kalu, wanted to bring him up as an orthodox Hindu, but Guru Nanak rejected the rituals and customs associated with Hinduism and other religions from the very start. Instead he showed people the essence of true devotion to God 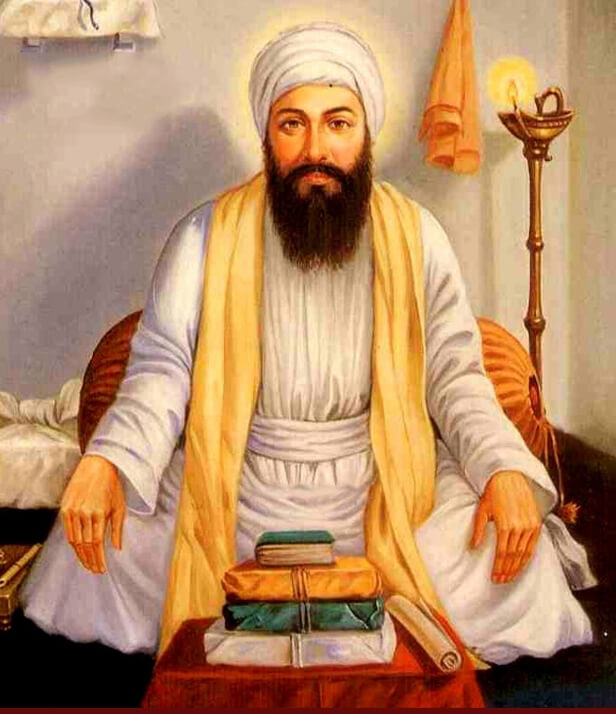 Guru Angad was the second Sikh Guru He was originally called Bhai Lehna. One day Bhai Lehna overheard a devout Sikh called Bhai Jodh singing Guru Nanak’s hymns. Bhai Lehna was deeply affected by the divine message in the Guru’s shabad (hymn). He found out from the Sikh about the greatness of Guru Nanak, and he set out to travel the very long distance to find him. When he finally met with him he recognised God’s light in Guru Nanak and fell at the Guru’s feet out of respect and love. Bhai Lehna never again left Guru Nanak, choosing instead to serve him in any way he could and walk in the true path to God. When Guru Nanak knew his time on earth was coming to an end, he began to test the faith of his followers in order to choose someone who could continue to teach the true message of God. He found Bhai Lehna to be the purest of the pure, and chose him even above his own two sons. He gathered together Sikhs from far and wide and blessed Bhai Lehna with the name Angad which means ‘part of me’. He then told his Sikhs that from that day, Bhai Lehna would be known as Guru Angad, the second Guru.Guru Angad collected together the hymns of Guru Nanak and wrote them, along with some of his own, in the Gurmukhi script. 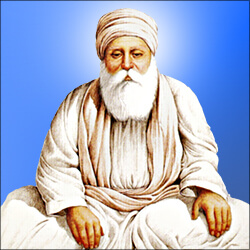 Became Guru at the age of 73. Organized three annual gatherings for Sikhs, set up the first pilgrimage site at Goindval Sahib and introduced Sikh rituals for birth and death. His most famous hymn, Anand Sahib, is part of Sikh daily ritual. Every day for thirteen years, he went to collect water from the River Beas for Guru Angad’s bath. He would set off at midnight with a large metal vessel tied to his back. He had so much love for Guru Angad that he would not even turn his back on him. He therefore used to walk backwards for the six mile journey through forests to the river, where he would immerse himself in the water until the container was full. Then he would take the water back to the Guru for his bath, singing prayers and meditating on God all the time. He did this from the age of 60 until he was 73, such was his devotion and love for his Guru. 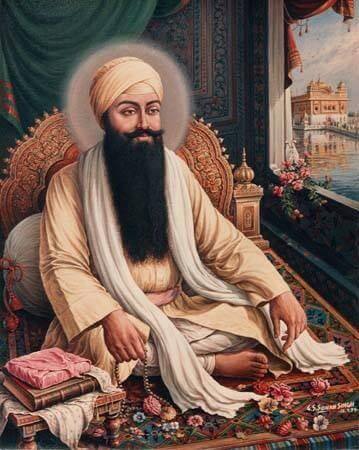 Guru Ram Das was the fourth Sikh Guru. The third Guru had tested his followers and found his son-in-law, Bhai Jetha to be the most faithful Sikh. He blessed him with the name Ram Das which means ‘God’s servant’ and told his Sikhs that Guru Ram Das would be the fourth Guru.Guru Ram Das founded the sacred city of Amritsar which had been an instruction left by Guru Nanak (the first Guru). He brought people of 52 different trades together at the place chosen by Guru Nanak which was uninhabited forest at that time, and began by constructing the lake which today surrounds the Golden Temple of Amritsar. Amritsar is now the second largest city in Punjab. Composed the Lavan marriage hymn, still used in Sikh marriages. 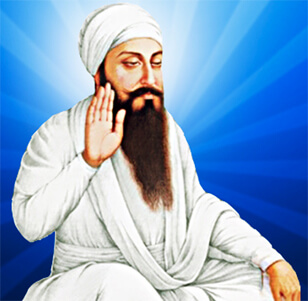 Guru Arjan was the fifth Guru, and the youngest son of Guru Ram Das. Guru Arjan built the Golden Temple at Amritsar in the middle of the lake constructed by the fourth Guru. He also built beautiful gurdwaras at what are now the great cities of Taru Taran, Kartarpur and Shri Hargobindpur. Guru Arjan brought together the hymns of the first four Gurus and his own into a volume called the Adi Granth.Sikhs believe that the Gurus’ hymns are the words of God, and therefore the Holy Scriptures are treated with utmost respect. From the day the Adi Granth was completed and entered the Golden Temple, Guru Arjan slept on the floor of the temple, out of his love and respect for the word of God. Guru Arjan was the first Sikh martyr. 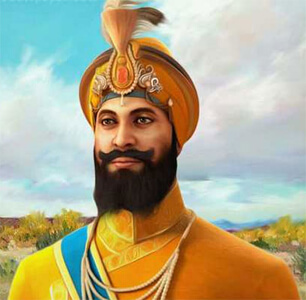 The sixth Guru was the only son of Guru Arjan. His name was Har Gobind. He was only eleven years old when his father was martyred and he became Guru under instructions left by Guru Arjan. Guru Har Gobind wore two swords along with his prayer beads, one represented spiritual power and the other worldly power: these have become part of the symbol of the Sikh faith. (Both of the swords can be seen at the Golden Temple in Amritsar.)

He built the Akal Takht at Amritsar as the seat of authority for the Sikh nation and created the Nishan Sahib (Sikh national flag) which can be seen outside every gurdwara round the world. Guru Har Gobind trained Sikhs to be ready to defend themselves and, more importantly, to defend the weak and oppressed in society whenever necessary. He kept a small army of Sikh warriors.

Guru Har Gobind taught that a follower of God cannot stand by and do nothing when their fellow human beings are being oppressed and tyrannised. If all peaceful means to end the tyranny fail then it is right and just to resort to the sword. 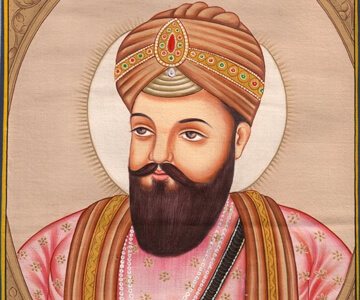 Guru Har Rai was only fourteen when he became Guru. He was ordered by Guru Har Gobind to keep 2,200 soldiers and horses with him at all times.The Guru was once asked by the Emperor of India to come and explain his hymns. He declined, but sent his son, Ram Rai, with strict instructions not change any word or meaning of the hymns, or to show any miraculous powers. Ram Rai was tested by the Emperor and finally broke the Guru’s wishes. Guru Har Rai, having heard this, declared that the next Guru would be his youngest son, Har Krishan – then only five years of age.

Guru Har Rai thus gave instruction that no Sikh was ever to change the Hymns of the Gurus because these are the words of God. He also said that Sikhs are not to show miraculous powers because that goes against the will of God. 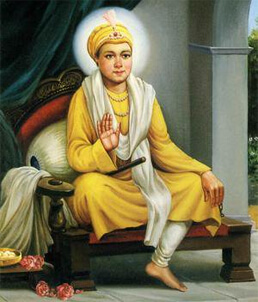 Younger son of Guru Har Rai. Har Krishan was only five years old when he succeeded his father, Guru Har Rai. He is sometimes called the ‘Child Guru’.He died of smallpox at the age of eight. Before he died he was able to name his great uncle, Baba Bakala, as his successor. Baba Bakala became Guru Tegh Bahadur. A famous gurdwara has been built on the site of Guru Har Krishan’s death in Delhi. 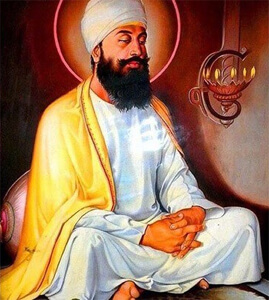 Guru tegh Bahadur was barred from Amritsar by Sikh rivals, so founded the Sikh center of Anandpur. He was beheaded in Delhi by Muslims for helping Brahmins avoid forcible conversion to Islam.The ninth Guru, Tegh Bahadur was given his name (meaning ‘brave sword’) to replace his birth name Tyag Mal. He was appointed Guru over several rivals at the age of 43.He was the great uncle of Guru Har Krishan, and one of the sons of Guru Har Gobind. Many people plotted against him. He continued the fight against the Mogul rulers who were demolishing temples and forcing people to convert to Islam. 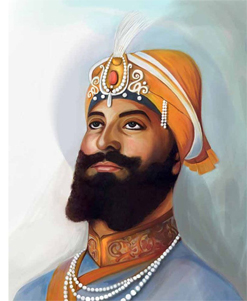 Guru Gobind Singh was only nine years old when his father was executed and he had to take on the role of Guru. He was the last human Guru, and probably the most famous. Gobind Rai, as he was originally called, was a clever linguist and a skilled horseman, archer and hunter. In the stylised paintings of him, he is often seen on horseback.

He was a great poet, and a book of his poems known as the Dasam Granth (the Tenth Collection) ranks second only to the Guru Granth Sahib itself. He made two highly important contributions to Sikhism – he formed the Khalsa, the community of the pure, and elected the Adi Granth (which became the Guru Granth Sahib) to be the final Guru.

When he was on his death bed, he took five coins and a coconut. He placed them before the Adi Granth. This was the act of installing a new Guru and, by doing this, he was naming the Adi Granth as his successor. The Adi Granth then became known as the Guru Granth Sahib.Guru Gobind Singh died of stab wounds in 1708. During his life, he and the Sikhs in Anandpur were besieged by Mogul armies, and he was forced to leave with his wife. Many battles were fought between the Khalsa and the Moguls. During these battles, Guru Gobind Singh lost his four sons and his mother. Countless numbers of Sikhs were killed, but this did not stop more and more joining the ranks of the Khalsa. 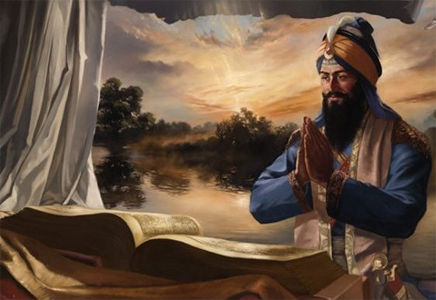 The Guru Granth Sahib was first compiled by the Fifth Sikh Guru, Arjan Dev, in 1604 in the city of Amritsar. Its second and last version was the handiwork of Guru Gobind Singh, and it was finalized at Damdama Sahib in the year 1705. He added the hymns of his father, Guru Tegh Bahadur, the Ninth Master 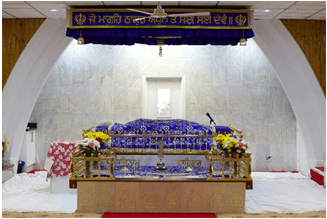 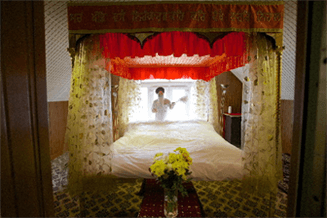 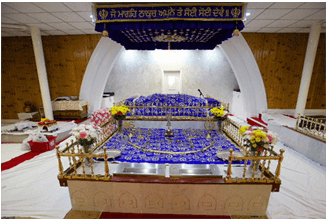 REGISTERED MARRIAGES have to be registered at your Local Registry office. Certificates have to be handed to the Gurdwara Registrars 28 days before. Do not make any arrangements until the registrars have been contacted.